When Jared, my grandson-in-law, told me about the mourning dove’s nest built under an eave of a house he and his brother Rusty are building, I was intrigued and asked him to send me a picture. (Look below) Jared and Rusty are trying to avoid that part of the building until the mourning dove finishes raising her brood. That may turn out to be difficult since the bird is on her fourth set of eggs this year. She’s already mothered three sets of hatchlings and seen them fly away! Jared’s report and picture have made me remember birds’ nest discoveries of years ago and not so long ago. 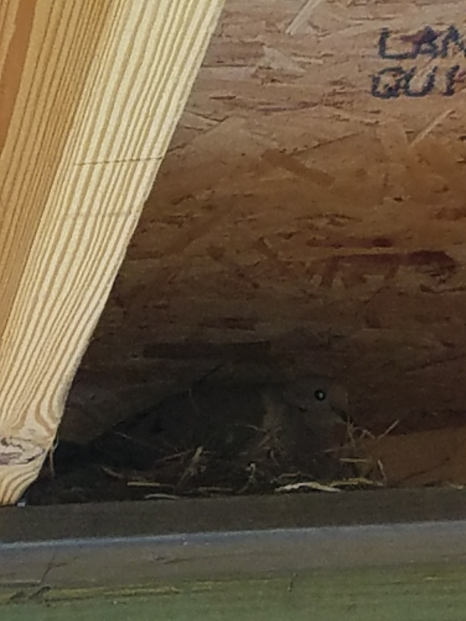 I can still remember the surge of excitement whenever, as a little girl, I discovered a birds’ nest. All ten of us children entered into the friendly fun of seeing who could find the most nests each spring and summer. No one won a prize or even had their name on a poster or had a special announcement made at suppertime. The joy was in the accomplishment.

I think our all-time favorite nest to find, partly because it was hidden so well, was a Carolina wren’s nest. The ones I remember were tucked down under low huckleberry bushes. The best way to find this nest is to be leaning far down picking the wonderfully sweet tiny huckleberries. The nest is built on its side like a neat cave. One can almost step on it and crush it before noticing it, except that the little mama in her muted colors gets nervous when someone’s nearby and begins chirping an trying to lead you in another direction, often feigning a broken wing for sympathy. Her anxiety gives her away. When you find the nest, you must get all the way down on your knees in the soft accumulation of leaves to peer inside and see the perfect clutch of three or four eggs. All our adult lives my sisters and I have compared any wonderful find to “like discovering a Carolina wren’s nest.”

Another nest that was a wonderful find when we were kids was a vireo’s nest. Suspended from a forked twig, this little nest would be tightly woven of very small materials like bits of moss and dead leaves and milkweed cotton. It was like a soft velvety-lined cup just the right size for a little vireo whose song we heard much more than we ever saw her. I can remember being held up by strong brotherly arms to see inside the tiny nest, and maybe once when I was older, trying in vain to climb to a position where I could see in one. These birds are very shy and we don’t seem to hear about them any more. But that could be because we’re not in the woods climbing trees!

Now house wrens are not into seclusion and remoteness. They build in friendly proximity to the human touch. My sister Suzanne has one right now in a bucket hanging on her porch. One year a wren built her nest in a door decoration at our South Broad house. The “wreath” sported a false bird house front and I guess it fooled that poor little bird! She managed to squeeze her weaving of pine straw, a piece of plastic bag, some bits of grass and leaves, even a little girl’s hair ribbon, into a sweet little nest between the door and that wooden decoration. If one of us forgot and opened the front door, she’d fly away in a flutter of startled wings.

Suzanne’s wren’s nest on her porch

Almost everyone, I guess, has found at one time or another, a wren or sparrow’s nest in a boot, on the back of a mailbox, or perched precariously over the top of a screen door. But the best one I’ve heard of was the find of Mr. Julian Roddenbery. For some reason his car wasn’t moved for several days and then when he went out to drive to town he discovered a little brown bird had built a nest in his car’s grill or in the edge of the hood. He began walking to town, wouldn’t move his car until that bird was all done with her nest. What a gentle man!

It takes a very sharp eye to spot a hummingbird’s nest. They like to build high in a tree and their nests are, of course, so tiny. Still, my alert brothers and my dad found hummingbird nests. Then, about twenty years ago, several of us were astonished when a hummingbird built her nest only feet above our heads in a maple tree near Mamma’s room. Mamma was very sick that year, not able to get out much. But she could see that tiny, thimble-sized nest attached to a twig and it brought many smiles to her face. She enjoyed hearing about the Canada goose family living at her pond that year, and she could take joy from seeing the birds at feeders outside her window. But the gift of that hummingbird’s nest so close by seemed like an acknowledgement from God that He cared about her so much and was watching over her.

Our two oldest brothers, I believe, were always the winners of the birds’ nest finding contest as long as they were at home. They each got credit for finding over one hundred nests in a given summer. After they left, others of us were winners, though I know I never did win. I have no idea now what my highest score was. We had some rather loose rules. We could count nests already found by someone else as long as we could honestly say we hadn’t known about them before our own discovery. We could not remove a nest from its place unless the birds were obviously done with it. Our tallies were according to the honor system for we had no cameras to prove our discoveries.

I have come close to having my eyes pecked by angry brown thrashers who thought I was getting too close to their nest in a camellia bush. They seem to grow the most anxious about the security of their homes. But then there are mockingbirds who turn ferocious if a cat even strolls by, and robins who go into frenzies when someone gets too close.

To take to the sky, what an awesome sight is an osprey’s nest, all lonely in a dead cypress, silhouetted against a Florida sky. Or a crow’s nest high in a pine tree. And have you ever “found” an eagle’s nest. No matter how many other people have already discovered it and even if a guide has to point it out to you, what a wonderful sight that is!

It is a healthy thing to watch birds “at work” and to discover their houses so cleverly constructed. The more I learn about them, the more in awe I am of the One Who created them!