We had been home for several weeks from our trip to Europe when I received a text from our Georgia traveling companions. “We’ll pick you up in twenty minutes for fish’n’chips in Moffatt.” Moffatt, Scotland, it was, a place we had all enjoyed so much along with Scottish driver friend John Lewis. I smiled as I typed in my answer: “Sounds intriguing but a bit too far.”

Moffatt was a place I’d never heard of before this trip. It was a former burgh in Dumfries and Galloway, its population 2,500. It’s on the Annan river, one of three rivers that originate within a few meters of each other, then flow three different directions. We found the little town so friendly and inviting. John showed us the statue of a bronze ram and told us its story. The sculptor, he said, unveiled his creation to a nice gathering of villagers. There was a respectful silence and then a young boy called out, “Why did ye leave the ears off?” John said the sculptor was so humiliated to have left the ears off that he committed suicide. But the village erected the ram, a fine symbol of a wool producing area.

Now, truth be told, that sculptor did not commit suicide, not then at least, because there are several pieces of his work created in later years. And as to the missing ears? The ram has curly horns, big showy horns. Who could be sure whether or not he had ears, save God alone? We liked the old ram and had our picture made with him.

Now, to back up a mile or one hundred, we had a big day before we arrived in Moffatt. Our road trip took us from Lockerbie all the way to Edinburgh viewing breathtaking sights along the way. I’m sure John Lewis must have wondered if we’d ever seen sheep before since we exclaimed so much over them. Actually, we’ve even raised a tiny flock of woolies and hair sheep in South Georgia. But there were so many in Scotland, thousands, white against those beautiful green Scottish hills, pastures divided by stone walls or hedgerows, even some regular fences. We enjoyed also winding roads, villages, and farms, glistening streams, and then the dignity and character of old Edinburgh. John was an excellent guide who told us so much as he skillfully twisted and turned in city lanes to give us all good views of Sir Walter Scott’s memorial, government buildings, kirks, and the Castle so majestic, and maybe forbidding, high on its craggy hill.

On the way back toward Lockerbie, north of Moffatt, John pulled over at a high overlook and invited us to see the Devil’s Beef Tub, one of South Scotland’s geographic oddities. We looked way, way down into the dark depths of a valley formed by four hills. John said it was named Devil’s Beef Tub because a Scottish clan named Johnstones, also referred to by their enemies as devils, used to cross the English border centuries ago, steal cattle, and bring them to this valley to hide them. I later read more interesting tid-bits about this unusual valley, some true, some probably not.

For instance, a Covenanter in 1685 is said to have tried to outrun enemy dragoons by climbing a side of the Beef Tub. He didn’t make it, according to the story. Much more recently, a woman lost control of her vehicle and plunged 500 feet to the bottom of Devil’s Beef Tub but was not seriously injured. No word about how she got out. Supposedly, her vehicle is still there. Sir Walter Scott included a description of the valley in his novel “Red Gauntlet”: “It looks as if four hills were laying their heads together, to shut out daylight from the dark hollow space between them. A damned deep, black, blackguard-looking abyss of a hole it is.”

Scott’s description gives me a chill. Certainly, I wouldn’t want to find myself in that valley for I’m sure I could never climb out. But it was beautiful that afternoon, from the top. The dark purplish shadows didn’t seem forbidding with bright sunshine around us.

Then we arrived in Moffatt and met the bronze ram statue. That’s when someone spotted the fish’n’chips shop and we realized how hungry we were. Harley was always hungry for fish’n’chips having enjoyed them so much when he and Debi lived in England years ago.

When we walked in the shop we found it busy with locals as well as tourists, with a friendly proprietor and a staff eager to make us happy. Just the warm tasty smells made us happy.

Now you have to know a little bit about fish’n’chips to appreciate our feast that night. Of course, anyone who’s been in Britain for any length of time would have at least heard about this iconic meal. Fish’n’chips is to England what a hamburger is to USA. Before our trip, my friend Sue Nell told me “Eat some fish’n’chips for me.” So–what you get is one or two very generous portions of golden batter-fried fish (a white sweet fish) along with a pile of what we call French fries, called in Britain chips and in France frits. A bottle of vinegar will be handy so one may sprinkle however much they want over fish and chips. The fish was perfectly golden and so crusty, not greasy at all, and the chips were really wonderful. We had enjoyed fish’n’chips in Portsmouth, Deal, and West Wickham and would have one more chance near Bromley. But the Moffatt fish’n’chips were the freshest, the crispiest, the most delicious. 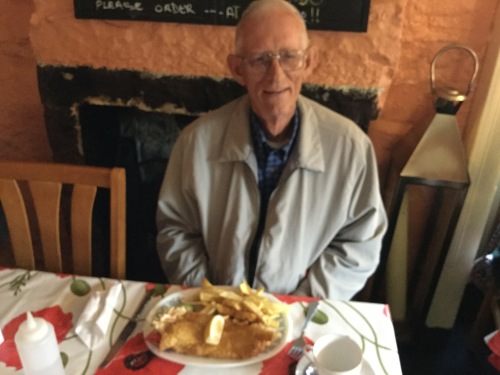 After supper we wandered along the street, window shopping, and back over to see the bronze ram again before we started back to Somerton House in Lockerbie.

A lovely day with friends, not to be easily repeated, but always warmly remembered.

So, yes, I would buckle into that British car with the rest, if I could, and happily set out for fish’n’chips in Moffatt.

Was it a pie shop, an ice cream shop, or a sandwich shop? We enjoyed some of all those, including chili and corn chowder. I guess it is a deli, a very charming one at that.

We’d never before heard of Udderly Divine. Finding it was one of those happenstances that became a special feature of our vacation conversations.

We had just left the Montezuma Castle, getting acquainted with history of cave dwellers. Not far from there was this small Arizona town called Camp Verde, in the Verde Valley. We had been enthralled by the awesome cliff homes (some of us older ones more than the very young ones!) but now we were hot and tired and thirsty, not to mention hungry. We had stopped at one restaurant already where my son Will, the scouter, had rejected it as not a friendly menu for all involved: my daughter-in-law, Christi, their three children, William Jr., Thomas, and Mattie, as well as Charles and me. He came back from checking out “Udderly Divine” with a thumbs-up but an edge of doubt in his voice. “I think everyone will like this place. But there’s only one lady running it and doing everything.” 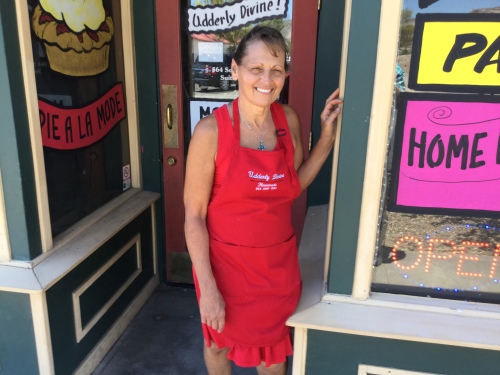 A hardworking restauranteur with a big smile

There was no one else there as we chose seats at two tall fifties-style chrome and black tables. The one lady greeted us with friendly confidence, explained her simple, yet complete deli menu and then retreated to let us make decisions. About then, more customers took their seats. How was she going to handle all of us? Why didn’t she have more help? Maybe someone “showed up missing,” as my brother John used to say.

By then we had discovered a spread of small, wrapped homemade pies on the counter and I knew my will power against desserts was not working. Whatever else, I would have a strawberry/rhubarb pie.

As instructed, we went to the counter to order. The seven of us requested various sandwiches–chicken salad, egg salad, grilled cheese, turkey and cheese on breads of our choice–or soups–corn chowder or chili. She then directed us to a drink box to make beverage choices.

I was struck by how clean and fresh everything looked. The black and white chessboard floor fairly sparkled. Counters and tables were chrome and black formica, some tables standard height, some taller like ours with stools to match. A back door opened to a kind of mini mall where Christi and Mattie went for a short browsing.

Other customers had given orders but in a very timely fashion we were served with graciousness by our lady whose name we now knew was Teresa. She made sure we were all happy and then went about serving others. Some of them, we could tell, were regular customers, very loyal customers. Teresa took time for a friendly conversation with each. I could imagine she has some customers in that small town who eat with her every day.

Those sandwiches were so delicious! Charles and Christi scraped the bottoms of their corn chowder dishes too. When we questioned Teresa she said she starts work about 3:30, makes pies and sandwich fillings and chowder as well as chili fresh every day. She told us in a very humble manner that even on hot summer days, like this one, her soups are always consumed. “Oh, and the pies, too,” she said. “Lots of people come in just for my pies..” As to having help, she doesn’t. She likes it that way. She’s not trying to grow a big business and she’s happy with things as they are. 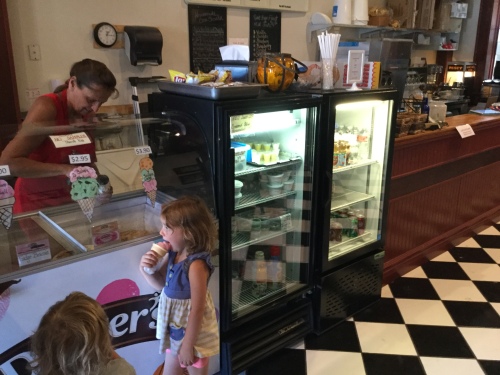 Several of us wanted ice cream which Teresa dipped. Others chose pies. I did share my strawberry/rhubarb pie but, oh my goodness, it was good. Tasted like Mamma’s she used to make from rhubarb grown in the corner of her garden. Teresa had baked other pies that day: blueberry, apple, peach, and pecan.

We felt like old friends by the time we left. Teresa’s happy smile was contagious and made us all have good memories of the small town of Camp Verde. In fact, as we happily babbled about how good everything was, we agreed it would have to be one of our top favorite eating places of the whole week-long trip. 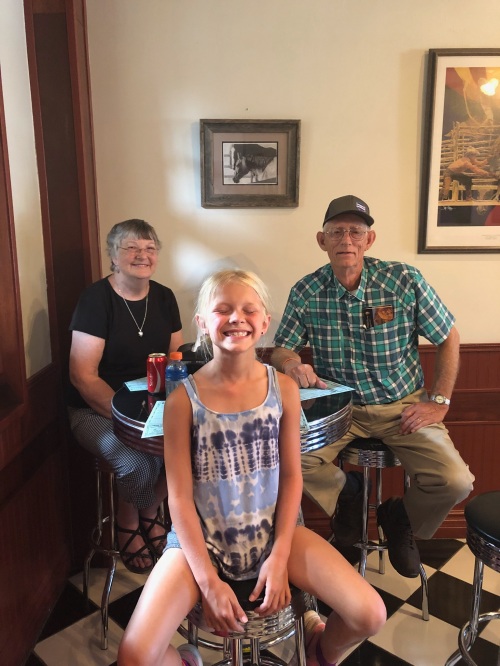 Mattie joins us for a Satisfied Customer picture!

On the “Coffee Gram,” paper placemat advertisers given to each of us, are “tons” of little sayings, interesting ads for Watkins naturals, Skyliners Hiking Club, a backhoe service, hay sales, Saturday night dances and low-cost pet vaccines. Reading it gave me a snap view of that community.

In the middle of each green placemat is a quotation from the Bible: For I am persuaded that neither death nor life, nor angels, nor principalities, nor powers, nor things present, nor things to come, nor height, nor depth, nor any created thing, shall be able to separate us from the love of God which is in Christ Jesus my Lord. Romans 8:38,39