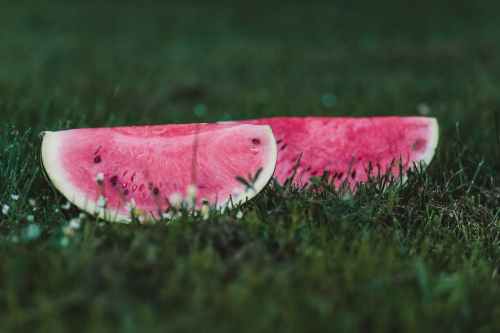 Photo by Kristina Paukshtite on Pexels.com

There’s nothing better on a hot summer’s afternoon than a slice of cool pink watermelon. We had a concrete picnic table at the house where we lived raising our children. It was perfect for watermelon cuttings. Many a Saturday afternoon we with perhaps an extended family group as well as friends would gather around while Charles “cracked” a watermelon wide open, then cut it into generous smile shaped pieces. Finicky ones would use a fork, others dive their very faces into the juicy melon spitting out the seeds with eager delight.

Some watermelon eaters opt to have just a portion of a slice, the “heart,” that beautiful, almost frosty-looking upper side of the smile. Others will eat right down to the rind and will have competitions over who might spit a seed the farthest. You can quickly tell the difference between the “heart” eaters with a fork and the “whole melon” eaters who have tell-tale juice running off their chins.

Most of the time right now there are only two of us here. We cut a watermelon into manageable small pieces and keep them in an airtight container so we can dip into them whenever we like. When I taste the juicy sweetness I remember many of those good old watermelon cuttings. One, in particular, was very different from the rest.

In my book Stone Gables I’ve written about the time when a watermelon vine grew in the corner of Mamma’s garden. She hadn’t planted it but we were so excited when it came up. One watermelon developed very nicely getting bigger and plumper as the summer went by.  Mamma “thumped” it almost every day and kept saying it wasn’t quite ready yet. But one day she agreed we could pluck it from the vine and carry it to the spring to cool.

We could hardly wait for that watermelon to be cool enough according to Mamma’s standards. Finally we all hovered around a big table-like rock near the spring while Stan did the cutting. We were holding our breath in eagerness as the knife cut lengthwise of that beautiful green melon. As it cracked open to reveal the inside we  we groaned in unison and even stepped back, I think. The watermelon wasn’t a watermelon; it was perfectly green inside. “It’s a citron,” Mamma said in disappointment. “I knew it didn’t thump right.”

Mamma was loathe to throw anything away so she had us haul the non-watermelon back to the house where she pared the rind into cubes and began boiling them down with sugar to make preserves. We still talk about the disappointment of that day.

Many another time we had wonderful watermelon cuttings on the patio at Stone Gables. People sat on the patio wall, in folding chairs, or just stood around with juice dripping between their fingers as they ate. Stan and Tom were both especially thoughtful about bringing watermelons to the big family gatherings. And never again, in my memory, did we have a citron instead of a watermelon.

A really good thing about watermelon, for those who are watching their calories, is that this “fruit” is ninety percent water. One can eat a lot of watermelon without worrying about blowing a diet. Also, the sugar is a kind sugar that doesn’t harm a diabetic, within reason.

A phrase from an old Tom T. Hall ballad comes to mind: “…old dogs and children and watermelon wine.” It’s a fetching tune and an intriguing thought but when I think of watermelon turned into wine I have to make a face. I’ve had the misfortune to let a watermelon spoil. Cutting into one of those is worse than opening a citron! What would watermelon wine taste like? I wouldn’t be able to get past the smell to find out.

Pick a watermelon from a crate at the store. Run your hands over its sleek dark hide, striped almost like a huge lizard of some kind. Take it home and cool it in the refrigerator, or if you’re in a hurry, cool it in the freezer but don’t leave it too long. Then crack into it. Open the halves and reveal the beautiful blends of slightest pink and rich red, the frosty heart, the rows of black seeds. Slice into smiles or handy wedges or fork-fun chunks and enjoy!

O taste and see that the Lord is good: blessed is the man that trusteth in him. Psalm 34:8

One response to “Watermelon Time”