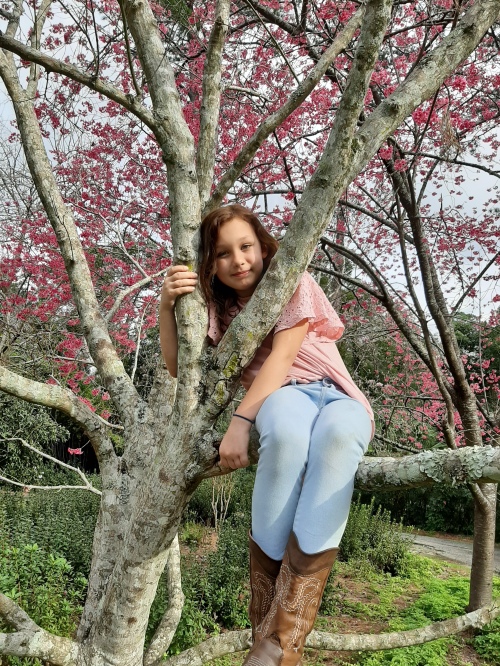 When Charli hoisted herself onto a limb of a Japanese maple and happily requested her book be handed up so she could read up there, I was reminded of many other tree climbers and situations.

Since Hurricane Michael whipped through Grady County in 2018 we’ve seen a lot of serious tree climbers. Well, they don’t actually climb the trees but they climb to the treetops in their buckets. I am in awe of the skill and the daring of the tree service men.

But I’m thinking more of climbing trees for fun–like Charli.

My sister Jackie remembers a time when she and several siblings were in “The Big Redpine” the afternoon a great announcement was made. She said she didn’t dare climb as high as some of the others but was far out on one of the lower limbs. The tree was remarkably good for a lot of climbers as it had many long sturdy limbs, lower ones that brushed the grass, higher ones easy to scramble up to. The tree was shaped like a huge Christmas tree and stood on a grassy knoll in the pasture. The whole tree was thick with Knight kids that day because they’d been strictly forbidden, for some reason, to enter the house. The reason finally became known when our oldest sister, Pat, called out from the top of the next hill that a new baby brother had been born and the children could now come see him. Jackie remembers seeing the doctor’s car head down the driveway and wondering why he had come to see the baby.

I really identify with Charli in her love for climbing trees because that was one of my favorite things to do. I’m sure having all those brothers and sisters scaling trees influenced my yearning to go up high and to hide in leafy treetops. One of my favorite trees was a dogwood near the kitchen door that was so tall it reached above the roofline of the house. From a comfortable spot high in that tree I could see but not be seen. It was a little hard to carry my book up there with me but sometimes I managed. I felt almost free as a bird up there. But the day I put my weight on a spindly limb and crashed earthward I had no wings to help me out. In fact, I landed on my little sister, Suzanne, who was sitting on a stone under the tree. Somehow she broke my fall and neither of us was hurt.

Another time Suzanne and I both were aloft in a very tall white pine.

I had to stretch pretty hard to pull myself up one limb to another as they were so far apart. Suzanne followed behind me but she was having to stretch harder with her short legs. We were intent on reaching a squirrel’s nest where we were sure there were tiny babies. When I realized I couldn’t climb as high as the squirrels did, I looked down and saw earth far, far below. The chickens eating their evening corn even looked tiny. After surveying the whole yard from my lofty height I admitted to Suzanne that we weren’t going to see the squirrel babies and that we’d better start down. Suzanne balked. She had climbed up but she wasn’t going to climb down. No amount of urging her did any good and night was falling fast. We both yelled until dear Jackie came to the rescue. She climbed up close to Suzanne and gave careful encouraging instructions to guide her down, step by step.

My children enjoyed climbing one of two tung oil trees in our pasture. Its limbs were sturdy and generous. It even had good limbs for building a level tree house. William and Julie hauled sandwiches and books to their platform using a bucket and a rope. It was always more fun when they had friends Mike and Kimberly with them. It’s amazing how a little elevation can give you a different perspective, a feeling of detachment and maybe a little power. Once you were safe in the tree house, the cow couldn’t chase you nor any imaginary monsters.

Our grandchildren spent hours in an old overgrown Ligustrum tree in our backyard, the tung oil tree being long gone. The Ligustrum was so leafy and wonderful for hiding in, climbing to various levels, for playing war, jungle living, or trying out roping skills. The fig tree, an ancient one with sloping limbs thrusting in various directions, was not as good for hiding but was excellent for a quick perch with a cookie in hand.

One of the best climbers I’ve known is our great granddaughter Candi. She could “walk” her way up the trunks of a pine tree and magnolia. When she reached the high limbs of the magnolia she would swing herself over and perch in the top story of that tree for a long time. “Where is Candi?” we would wonder and one of the other children would report that she was up in the trees.

One tree I remember so fondly from my tree climbing days was an oak far back in the woods. Its limbs were all too high for us to reach except for one that was thick as a tree itself and grew horizontally some twenty feet from the trunk. It was high enough from the ground that our tallest brothers could just walk under it. They could jump up and get a hold for pulling themselves up. It seemed an eternity before I was able to climb up. But once up in that tree, one had a wonderful view of the woods, a little brook bubbling by, and smaller children and dogs who couldn’t go so high. Balancing oneself for a walk along the limb was a competitive sport as was the daring jump back down to the ground. In spite of all our tree climbing and many falls, none of us ten children ever suffered a broken bone until after we left home.

I’m encouraged when I see Charli and others enjoying tree climbing. With all the playground equipment available and with trampolines and go-carts and gymnasiums, children still find great pleasure in the simple sport of tree climbing.

Needless to say, I no longer climb trees. But this I can do. When things get a bit dicey or overwhelming, when I find myself in an MRI tunnel or facing problems that seem unsolvable, I can take just a moment and “project” myself into a tall, gently swaying pine. It is important, of course, to come back down, hopefully with a better attitude. I’ve always enjoyed hearing and telling the story of Zacchaeus up in that sycamore tree. The best part of the story was when he came down and Jesus went with him to his house for dinner.