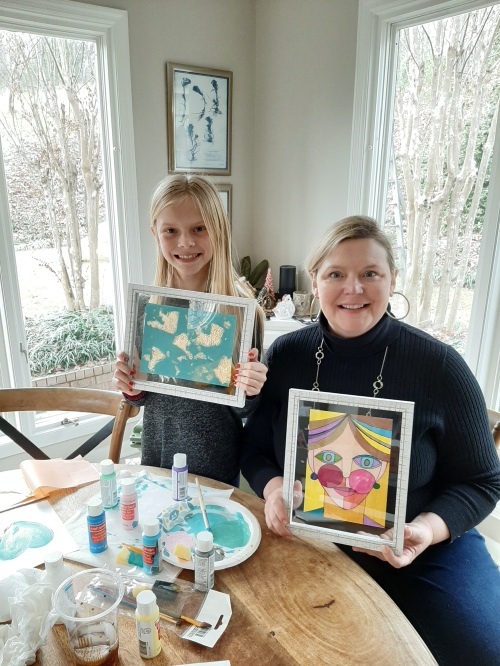 They could have been playing video games, taking a nap, watching a movie, baking, or doing their nails. There were many choices a mother and daughter could apply themselves to, either together or separately, on a holiday. Only a year or two ago Mattie would have been contentedly playing with her dolls. But on New Year’s Day Christi and her daughter, Mattie, decided to paint.

They invited me to paint with them but I preferred to drop in and out of their breakfast room “studio.” I didn’t have any idea what I might try to paint and they looked so cozy, just the two of them. By dropping in and out I could watch their progress as well as participate some in the doings of the rest of the household. The guys were all engaged in watching football games. William and Thomas took time at interludes to ring a few basketball hoops. Kate, the dog, needed a rub between the ears every now and then. And besides all that, I was absorbed in the book I was reading.

Interestingly, the book demanding my attention was Tracy Chevalier’s “Girl With a Pearl Earring.” It is a novel about Dutch artist Johannes Vermeer, born in Delft, Netherlands in 1632.  The author has described skillfully and beautifully the artist’s methods of acquiring colors, his moods and those of his household. He and his wife had many children. The story is told from the viewpoint of the maid who became entrusted with such tasks as grinding bits of bone into a fine dust to make the very shade of gray her master wanted.

The colors my daughter-in-law and granddaughter were using might have astonished Vermeer. The bright acrylics, the wonderful display of crayons and color pens, the rainbow of purple, pink, orange, mauve, emerald, chartreuse and ocean’s blue are so exhilarating. But, from reading this very thoroughly researched story, I have a feeling Vermeer would still be hunting the very gray he envisioned or the absolutely right shade of blue concocted from some rare substance purchased by the maid at the apothecary shop.

I heard giggles from the “studio” and found the girls admiring Mattie’s painting, a beautiful background of blue with emerging off-white shapes that could be clouds or birds. They asked Siri to play a song and then sang along. At times they were so diligently working they were each in their own world, others they were exchanging opinions about colors and sharing ideas.

The maid, Griet, who was hired specifically to clean Vermeer’s studio, became a valuable asset. She followed instructions meticulously. The props for his models, such as a brush and a cloth on a table, must be cleaned and left precisely as they were, even to the folds of the cloth. Griet did her job so well she was given more and more responsibility leading to jealousy among the other servants and Vermeer’s wife, Catharina. Griet’s tiny salary was supporting her mother and her blind father so, no matter how painful and uncomfortable life became, leaving the Vermeers was out of the question. Her aptitude for making colors and keeping things clean while keeping Vermeer’s secrets close, along with her interesting face, led to her becoming one of his models herself. Vermeer’s portrait, “A Girl With a Pearl Earring” (pictured on the cover of the book) inspired Tracy Chevalier to write this fascinating novel. She is the author of seven other books.

But, back to my own artists, Christi had developed an interesting geometrical face that reminded me of a mask one might wear for Mardi Gras, very colorful and impressive. Mattie had completed her study in swirls on a background of blue. Instead of birds or clouds, I see a striking resemblance to the Hawaiian islands. The two let me snap their picture to commemorate a lovely afternoon.

Shadows lengthened as the afternoon waned. Excitement built towards the time when we would all load up and drive to Cheesecake Factory for William’s 16th birthday celebration. Books and art supplies and even football were abandoned.

Kate, the family’s loving Norfolk terrier, whimpered wistfully as we all trooped out leaving her with a suddenly very quiet house.