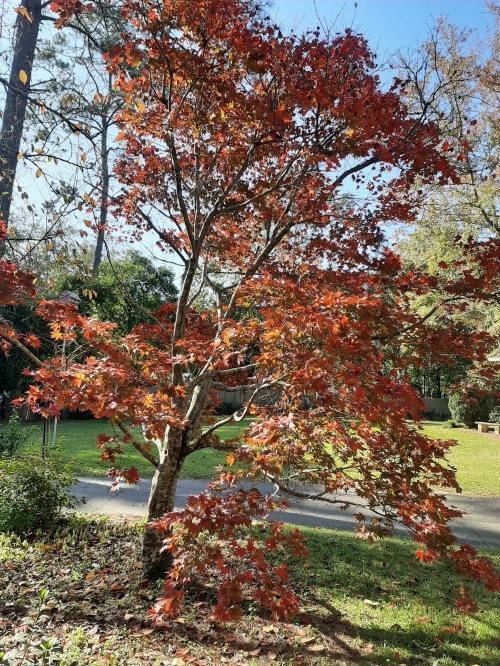 The pumpkin pies are out of the oven, the turkey is almost thawed. The Japanese maples are jubilantly red in the sunshine and our tiny gingko tree is bravely waving golden leaves. Tomorrow is Thanksgiving, a wonderful season of celebration. All our children, grandchildren, and great grandchildren will be around our table(s) and we are so excited. In all the preparations with the house full of the scents of cinnamon, nutmeg, of onions glazing, and nuts roasting, my mind wandered to a wonderful Thanksgiving 51 years ago.

I was in the hospital. Not because I had a fever or appendicitis. Not recovering from surgery or a broken limb. I was there because on the 25th of November, the Monday before Thanksgiving, I had given birth to a beautiful baby boy. In 1968 the maternity hospital stay was a standard of five days.

I woke that morning jubilantly grateful and excited about what the day would bring. On that day the hospital bent their rules and would allow husbands to have Thanksgiving dinner with the new mothers. I had hardly seen Charles since the night William was born. Dr. Maddox had left on Tuesday so Charles had the whole veterinary practice on his own, quite a challenge for someone who had only been out of vet school for six months.

But today was Thanksgiving and the animal hospital would be closed. I looked forward with great anticipation to his coming, to our actually having dinner together. I nursed my baby that morning, enthralled with his sweet face, his tiny hands and feet. I explained to him that his father would be coming that day but he would only see him through the glass of the nursery window. “But soon,” I promised, “we’ll all be at home, a whole family, and you can see your father face to face.”

The nurse came and took William back to the nursery and I tried to concentrate on the book I was reading. Every time I heard a step in the hall I’d look up expectantly. When was that door going to open and let me see Charles with his big proud smile?

The dinner trays were delivered, one for each of us. I peeked under lids to see what to look forward to: sliced turkey with gravy, moist dressing, mashed potatoes, green beans, cranberry sauce and pumpkin pie, I think, for dessert. I was wildly hungry but I wouldn’t think of eating until Charles got there.

What could have happened to him? Surely there couldn’t have been emergencies the whole long morning. Had he gotten stuck on some farm? Had he had a wreck? I had no way of knowing. The nurse came in and warned me that I’d better go ahead and eat. “We’ll be bringing the babies out in a little while,” she said. That nurse was very strict about her babies being nursed on schedule and the moms fully prepared. As I was to learn, she was very strict about fathers too.

I obediently began to eat the now cold food. There was a note on my tray that lifted my spirits. A child in a local church had written a Bible verse on a little card and it was tucked under the side of my plate. It said something like “This is the day the Lord has made. Let us rejoice and be glad in it.” The child had then added in crooked letters the message “God loves you and I do too.” Maybe my little boy would be writing a card like that some day to cheer a lonely person in the hospital.

It was about 2:00, I think, when Charles finally arrived. The minute I saw his face I knew he was so tired he could have dropped in his tracks but he was smiling and apologizing for being late. “A morning that just wouldn’t stop,” he said. He began eating hungrily as he told me details of case after case.

I heard the nurse calling down the hall, “Babies with their mothers. All visitors must leave.” I was always so thrilled to have time with my baby. But now? The sour faced nurse came in and gave Charles a hard stare before saying in her sergeant’s voice, “Fathers are not allowed in the rooms while babies are in.”

I got up the nerve to speak. “He just got here. Couldn’t my baby be the last one you bring out?”

The nurse didn’t say a word. She just pointed at Charles sitting there with his tray in his lap and then she made a sweeping motion toward the door. Charles left his tray, gave me a wink, and started out.

The nurse impatiently ushered him out as if he were a criminal or something.

As I nursed little William I told him, “Just wait till Saturday. We’ll all be home on Saturday and you will get to know your father.”

And we were. Charles lovingly cuddled his son, burped him, even changed diapers. And we’ve been able to laugh many times about the sergeant nurse who drove him out of my room that Thanksgiving Day.

William is 51 this year. He has a beautiful wife and three children, the oldest of whom (also named William) is now slightly taller than his 6’2″ dad. Hard to believe he was ever so small! And to think of the blessings we’ve enjoyed in the intervening years!

For all our family and other rich gifts from the Lord we give thanks.

May you have a wonderful Thanksgiving Day!

Married to a veterinarian for almost 54 years, I’ve heard about, witnessed, even occasionally helped with hundreds of calvings. As a child, on occasion, I knew the feel of a cow’s side against my forehead while milking, the sound of the milk hitting the bottom of the bucket. I’ve wheedled cows into a stable, hunted them when they were lost, and coaxed a calf to suck milk in a bucket with my fingers. I even wrote a children’s book about “One Brown Cow,” a lonely cow who had been willed her pasture for life. But this week for the first time my veterinarian and I completed the crafting of a life size cow for our manger scene.

We created the first figures for our manger scene (with the help of Fred and Linda Bearden) about ten years ago: Joseph, Mary, the Baby Jesus, and three sheep. Then, after several years we made a docile gray donkey. Now, finally, we have a cow.

After we stenciled the outer pattern onto a sheet of ply board, Charles began the tedious job of cutting using a jigsaw. My job was to hold the extraneous pieces of wood as they were cut loose. We were so excited to see the cow take shape.

Time passed before we could start getting the cow ready to paint. We used a brown as near to that suggested by the pattern as we could find. It doesn’t quite look like any cow I’ve ever seen! More time passed before we started stenciling the features onto the “old” girl. Then, finally, this week, we actually painted eyes, ears, nose, tail and demarcations to show her bone structure, her shape.

Neither of us is an artist, a fact anyone will know when looking at our creations. They are crudely painted but with much love which, the Bible says, covers a multitude of sins (I Peter 4:8). But Charles does know the anatomy of a cow. He should after having spent his life tending to them, operating on them, chasing them down, inoculating them and even performing necropsies to determine their cause of death. So, though the pattern was not always accurate, Charles could fill in the “gaps” with his knowledge of the shape of bones, where this line should end, where another would help to give more substance to our cow. Neither of us is happy with the ears, partly because of that awful Pepto Bismol pink on the inner ear. But, somehow, the overall appearance is such that we can almost imagine this cow mooing on the night Jesus was born.

The art in my little cow book is referred to as “whimsical art.” Maybe what we’ve done on this poor cow is akin to that cartoonish creativity. (My apologies to all artists.)

Anyway, we’ve decided she will “do.” She doesn’t have to give milk, mother a calf, browse a pasture, chew the cud, or anything strenuous. Her only job is to be part of a scene that reminds folks of that holy night in Bethlehem when Jesus was born.