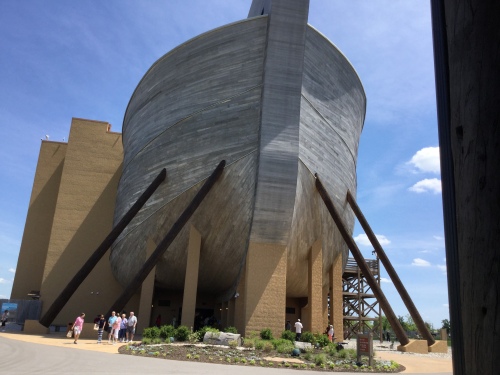 It’s called an encounter instead of a museum for a reason. Entering the Kentucky ark made to God’s specifications for Noah of ancient days is an experience.
Whether or not you are a believer in the one true God, you couldn’t leave that ship the very same person who entered.

We went to this wonderful attraction several months ago but I’m just now writing about it. The Encounter was too rich, the information too overwhelming, to begin immediately to recount it. Friends had been there and told us about it; we had read about it; but until we experienced it ourselves we could not imagine its magnitude.

The original Noah’s ark was huge. Noah built it in a dry land midst jeers and taunts of neighbors who’d never experienced rain and thought he was crazy. He built it because God told him to. The floods came, as God had said they would, and covered the whole earth. The only people to survive were Noah’s family, eight people. The only animals to survive were those brought to Noah by God and given space in the ark, two of every kind.

You can read about the original ark and the flood that God sent in Genesis chapters six, seven, and eight. The present ark in Williamstown, Kentucky is built to the exact same specifications. God chose Noah, the only faithful man He could find, to build that first ark for the purpose of saving whoever would choose to enter the ark. God chose Ken Ham to build the life-size ark in Kentucky for the purpose of answering the many questions people have concerning this phenomenal ship.

Some of those questions are: What does two of a kind mean? How did Noah fit so many animals on that boat? What happened to all the waste? How did they have enough food? Where did the people stay?

As we entered the ark, our first reaction was one of total awe at its sheer size: in present day measurements, instead of cubits, the ark is 510 feet long, 85 feet wide, and 51 feet high. It took 3.5 million board feet of timber to build it. By the way, it is the largest timber-frame structure in the world.

As we continued to explore the three decks we saw living quarters for the four couples (Noah and his wife, their three sons and their wives), some live animals in nice roomy compartments, in other enclosures life-size animal “dummies.” We saw means of cooking, gardening, weaving, and carpentering. After all, Noah’s family lived there for 150 days! There were life-size figures, some animated and speaking, of the family members going about their daily tasks. I’d never before pictured the women cooking on the ark. I had not imagined they might have a loom for weaving, certainly not that they might grow vegetables in tubs and boxes.

All along the way there were excellent signs and charts explaining what we were seeing. Ken Ham, whose passion is to reveal God’s word to the masses, has exerted an extraordinary amount of energy, time, and funds making this knowledge available in a fun and believable setting. Every detail has been researched and explained as facts or as speculations in keeping with history. 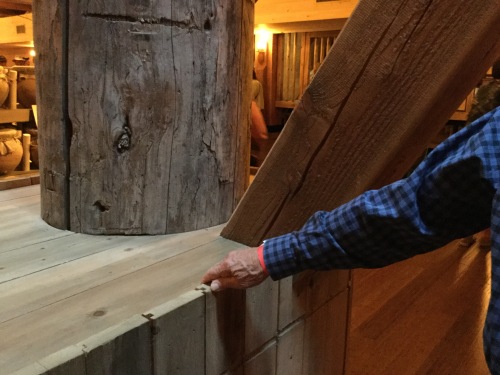 The engineering and workmanship of the structure is mind boggling. This ark, built to show what Noah’s was like, is also comfortable and accessible to thousands of visitors a day. The builders managed to make it where we could “peer into history” at the same time have restrooms, good lighting, long easy ramps, and even a restaurant. Noah spent 75 to 100 years building the original ark. The Ark Encounter was constructed in six years. The original ark God built with Noah’s hands was to save Noah and his family. The Kentucky ark was built with the hope of saving masses for eternity as they encounter the Creator and Redeemer God.

The story of Noah and the flood, according to Ken Ham, has been turned by many well meaning folks into a cutsie pie fairytale. Children have grown up viewing this part of the Bible as unbelievable. And if they couldn’t believe the account of the flood, then why should they believe in Jesus’ virgin birth, sacrificial death, and glorious resurrection? 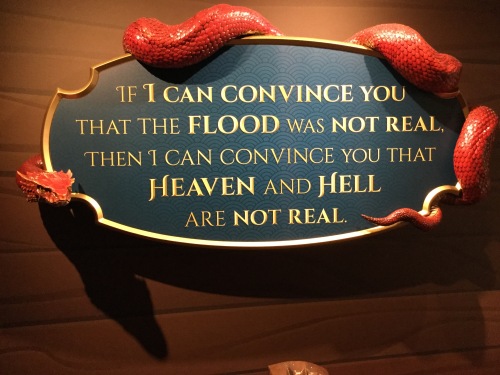 Outside the ark we wandered around in the Ararat Zoo enjoying some unusual small and large animals–such as a water buffalo with a shaggy coat, a bearded dragon climbing his keeper’s shirt, and a huddle of ostriches. We ate in the huge buffet style restaurant before we left. The food was delicious, fresh and delightful, not left over from the flood!

Just twenty miles from the Ark Encounter is the Creation Museum. We spent a day at each attraction. It is hard to say which I would recommend you do if you could only do one. I’m leaning toward the Ark. We did the Creation Museum, then the Ark, but some started with the Ark. Whichever way you do it, allow for plenty of time. Allow one day for each one.

We were so blessed to be able to hear Ken Ham speak in person in a large auditorium. His Australian accent, his humor, and his passion for reaching crowds for Christ kept us spellbound. He addresses the age old question of where Cain got his wife and gives a wonderful lesson in genetics.

Don’t go to eastern Kentucky or to Cincinnati, Ohio without visiting one or both of these wild and wonderful attractions. Hey, they’re both kid geared too. You can even spin through space on a zip line at the Creation Museum. I wonder what Noah would think about that!