I probably would not have known to look for Petoskey stones had Sally Whitfield not told me about them and shown me a picture before we left for Michigan. Our first stop in Michigan was at Charles’ brother Ronnie’s in Adrian. His wife, Diane, learning of my interest in these unusual stones, plucked one from her collection to show me. It was a wonderful brown freckled stone reminding me of a special hen’s egg.

Charles, his sister Revonda, and I arrived in Boyne Falls, Michigan on Friday, April 26. On Saturday we started out to discover Petoskey, a lakeshore town twenty miles away. Hopefully, we might even find at least one Petoskey stone.

We laugh at my sister Jackie for describing the weather as “bitterly cold.” To her, it’s never just cold, it’s bitterly cold. But, believe me, that day in Petoskey, April 27, was bitterly cold. We were wearing double layers, but still not enough since we couldn’t believe it would be that cold. We did have on hats and scarves and Revonda had her gloves. I’d forgotten mine. The wind whipped us in the face like a horse’s tail as we scrambled from the car to see what we could see. Since cruising along the lakeshore had not revealed to us any good place to walk on the beach, and since it was so cold, we decided to browse in the gift stores in the quaint little town.

In “Grandpa Shorty’s” we found Petoskey stones. They had both polished and “raw” stones from the sixty-mile stretch of Lake Michigan’s shore where, particularly after the spring thaw, they can be found. We learned they are fossilized coral, some striped almost like swirled chocolate candy, others spotted like leopards. We were told that, were you to crack one open you would find where multiple creatures had lived inside. These are thought to be remnants of a time when that part of the world was under ocean water.

Yes, I bought some. This might be my only chance. I left the shop feeling smugly rich with my little bag of stones. But that wasn’t the end of our search for Petoskey stones.

As we drove around discovering more of the little town we found a stretch of beach in a park where we could actually walk on the rocky shore. Charles gallantly offered to let Revonda and me walk while he drove to the other end of the cove. Was he just being gallant or did he want to stay cozy in the car? We didn’t care, we were so delighted to get down to the shore.

It was still bitterly cold. Our layers of sweaters and coats felt like nothing in the biting wind. But we found such interesting stones worn smooth as silk by years of tumbling water. We weren’t finding Petoskey stones but we kept looking for them, like teenagers hunting a four leaf clover.

Clutching our stones in icy hands, exclaiming over one shaped like a shoe sole and another like a goose egg, we were shivering in the cold and heading for that warm car when, suddenly, I spied it.

A stone the size of a fat baked potato sat conveniently on a boulder near the water’s edge. It had the sure design of a Petoskey stone, the pattern of shaded spots like the back of some kind of turtle. I picked it up, looked around to see if someone were coming back for it, and then walked on feeling as if I’d just won the million dollar sweepstakes. I didn’t even offer to draw straws with Revonda over it. Actually, I think she may have been glad not to be the one hauling it out of there. It was pretty heavy.

Late that afternoon, back at our hotel, we all three enjoyed a luxuriating soak in a bubbling hot tub. The snowy slopes behind our hotel were fascinating but these South Georgia tourists were unashamedly wimps when it came to temperatures of “37, feels like 26.”

Of course we were ready the next morning for another adventure with added layers and good scarves and gloves.

For the rest of our journey a box of stones had to fit amongst the luggage. 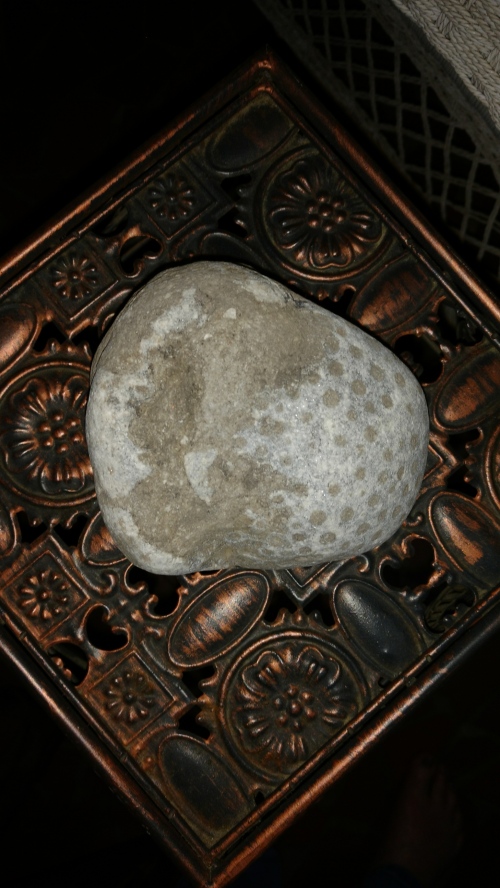 One response to “Petoskey Stones”