Pie On The Floor

It’s almost Thanksgiving and never have we had more to be thankful for than we do this year–big things like hope, bravery, safety, love, family, joy, food, water….. But one of the top items on my gratitude list is that of simple kindnesses, some of which have happened in the last few hours. Like the matter of the pie on the floor.

But before I open up that humiliating story, I’d like to mention a few others.

This morning a sweet little lady hugged me. Now we’ve hugged before but always I initiated the embrace. Mrs. Z is almost deaf and hears very little of what I say when I lead devotions at her assisted living home. But she tries to stay engaged, smiling and nodding from time to time. She tells us every week that she’s going to get hearing aids but it never happens. Her family is gone and she’s very lonely. Sometimes she won’t come to the activities room where we meet because, she says, she’s too sad. But today she was there participating as much as possible. After the program she approached me and, letting go of her walker, she beckoned me to come give her a hug. She’ll never know how much that meant to me.

Yesterday my two youngest great-grands spent the afternoon with me. It was a beautiful afternoon and, after making and enjoying banana splits, we decided I would time their bike trips around our circular driveway. Charli, seven years old, consistently beat Kaison who is five. At first he didn’t mind because he didn’t understand that the one with the lower number was the winner. As he caught on to the meaning of thirty seconds versus forty or forty-five, he began to get very discouraged. Finally, he sat on the side of the driveway silently weeping. Charli came and whispered to me that she would purposely go slower the next round so Kaison would win. We persuaded him to try one more time and when he won he pumped the air with the greatest delight. Charli looked at me and grinned. 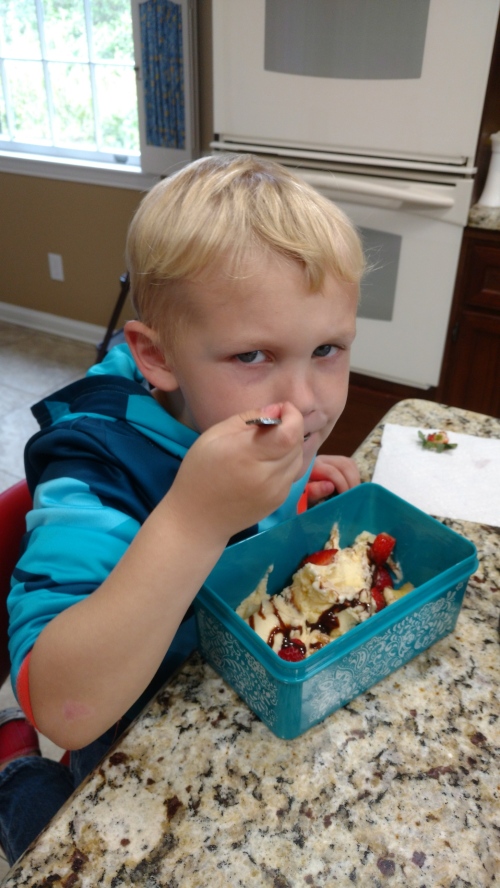 Nothing better than a banana split–unless it’s winning a bike race!

Sometimes it’s what someone doesn’t say that is the kindest of all. My eternal teaser of a brother made no jabs at me and my incompetent driving a few months ago when he saw my crippled car.

Kindness surprises us in the most delicious ways! Our grandson, Charles D, came in recently lugging two big boxes of lovely citrus–grapefruit, satsumas, kumquats, and lemons.

But about that pie…

I was baking for the holidays, potato pies among other goodies. It was 9:00 last night and I was very tired after the bike timing, the banana splits, etc. Only two pies were left and the buzzer had alerted me that they were ready. I was pleased with the way they’d set so nicely and had that glisten of really good potato pies. I pulled one out and set it on a rack to cool, then turned back to get the other one. Getting a grip on the edge of the hot pie with my bulky oven mitt, I prepared to set it on a rack to cool. But something happened about then. I lost my grip and the pie hit the floor–upside down, splattering hot potato up on the cabinet and all around. Not only had I lost the pie, but how would I ever clean up all that mess!

Charles suddenly appeared, leaving his favorite political show behind. He calmly began to scoop up the mess with a dustpan. “All that hard work,” he said sympathetically as he shoveled the gooey mess into the trash can.

As you enjoy your Thanksgiving, remember this verse, Galatians 5:22: But the fruit of the Spirit is love, joy, peace, forbearance, KINDNESS (my caps), goodness, faithfulness, gentleness and self-control.

2 responses to “Pie On The Floor”