The year my niece Carol was born I was fifteen. I already had several nieces and nephews whom I loved. But I was given a special privilege at the birth of Carol. I was considered old enough to go take care of her three older siblings while she was making her debut in the Clayton hospital.

It was a gorgeous autumn day. The plan had been made way ahead that when it was time, my brother John would come get me and I would stay as long as needed at his and Betty’s home on Warwoman Road. The waiting had not been as long for me, I know, as it had been for Betty. But I had grown mighty impatient. So that autumn day it was as if a dozen Christmases had come all at once.

Betty hadn’t had the baby yet. In fact, she was cleaning, doing laundry, cooking all day that day, my first day. She was almost giddy with energy and end-of-a-journey fulfillment. It was steep down the backyard to the clothesline and I helped her carry the laundry and retrieve it when it was dry. She gave me instructions as we went along. “Remember to give them their vitamins, Paul doesn’t like green beans, tell them to make their beds, be sure and brush the girls’ hair, be sure they brush their teeth”, etc. etc. I was almost dizzy with instructions by the time she went to the hospital when the pains were close enough, about 6:00. My brother would stay with her until the baby came but soon would have to return to his job “on the road” as an Edward Don salesman.

My parents, though only about thirty miles away, were out of reach for advice as there was no phone. It was kind of scary, being a “temporary mom” to three children, but so exciting!

Some scattered memories of that great adventure on Warwoman Road: the sound of happy children playing on the lawn in the late afternoon; the smell of leaves burning; the view of Screamer Mountain in autumn color; Betty’s well-ordered kitchen with meal plans and resources for every day; the absolute delight of all of us when John came in from work; my pride and consternation when Betty sent word from the hospital she wanted me to make some homemade bread; the fun we all had during those days, lots of laughter. No one broke a bone, no burglar intruded, if we forgot vitamins or teeth brushing everyone lived anyway. Paul did an impersonation of Gene Autry’s country singing (or was that another time?), Joan tried to lug all her dolls at one time down the hallway, Emily had a new jump rope, I think, and also she helped me remember all those instructions.

The big day finally arrived. Carol was coming home–Carol Leslie Knight. She was absolutely beautiful! Joan immediately recognized that this live baby was so, so much better than her dolls. Paul was somewhat skeptical. Did this mean he’d get no attention anymore when he skinned a knee? Emily learned how to change a diaper and to fold diapers. I learned how to wash them!

Some lasting impressions: Neither John nor Betty used sugar or cream in their coffee so I decided I could drink it black too, much easier than hunting up cream and sugar, and I’ve drunk black coffee for sixty years; Betty used the most delightful smelling lotion on her baby; babies are so sweet, so fragile and yet strong but they do cry and when they do, it sure is nice to hand them over to their moms; but moms of new babies do sometimes cry too and it’s best to leave them alone when they do, maybe go bake bread.

Carol was named for our sister who died at the age of four of a ruptured appendix. But she was also named appropriately because she’s always been a cheerful sprite, a “caroling” person everyone likes to have around. She was one of my flower girls at my December wedding. John reported that she, at the age of eight, sang “Little Drummer Boy” the entire trip from Asheville NC (where they had moved) to Clarkesville GA.

Carol now is a grandmother. I take great joy in seeing the pictures she sends of “her boys” and stories about their games and aspirations. 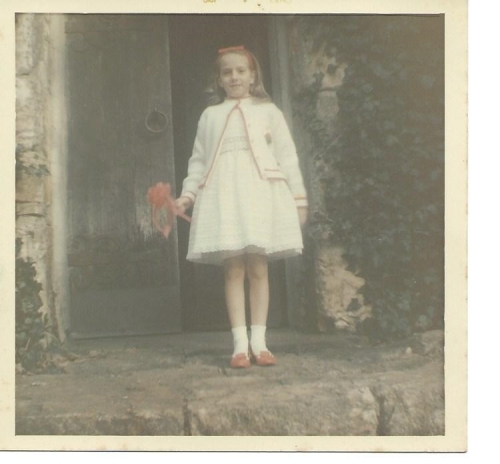 Carol at Charles’ and my wedding in 1965

2 responses to “A Carol Arrived”