Did You Labor or Play on Labor Day?

I’m not advocating one over the other, just chatting about our Labor Day.

The table was laden with dishes of potato salad, baked beans, barbecued goat, grilled chicken, blueberry peach cobbler, and homemade bread hot from the oven. The barbecue was a special achievement. Charles had mentioned several times that he was going to barbecue a goat on Labor Day. He butchered on Saturday, then started a long day early Monday morning of parboiling, smoking, then chipping and baking. I was so busy in the kitchen I didn’t have time to go “watch” the smoking process but whenever I looked out from the porch I had to smile at the column of smoke rising above intervening shrubbery. Charles D marinated chicken for twenty-four hours before grilling it. He also helped me in the kitchen, going to WalMart for peaches to put in the cobbler.

While the grilling and smoking was going on children and adults squealed and cheered their own successes at the game of Corn Hole. To make the day even more fun, our friend whom the children small and bigger all call “Mama Jane,” came to enjoy it with us.

The finished products were served on a long picnic table in what we call the Green Barn. After a heartfelt prayer by the tired barbecuer, everyone loaded their plates. There was that initial quiet when hungry people take their first bites, then jokes and stories flew, each trying to outdo the other. 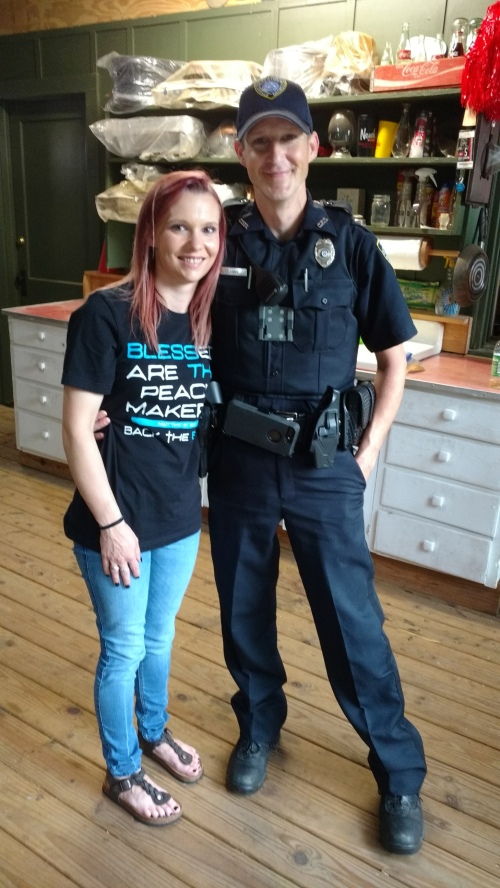 After supper Jared prepared to go to work as a policeman serving the night shift. We hugged him, told him to be careful (a “helpless” thing to say, but we must say it!), and waved him off. He looked so fine in his uniform and we are proud of his achievement–hours of preparatory classes, long nights keeping Camilla safe. We prayed he’d be ready for any case that might come along.

Putting things away, restoring order, was a team effort, always a fun time of chit chat, rattle of dishes, divvying out leftovers, and, in our case, hauling things back from the Green Barn.

Grandaddy had recently taught Kaison to ride his bike without training wheels. (We count ourselves very fortunate to have the privilege occasionally of teaching these little ones something!) That is one happy kid. He still can hardly believe he can do it and wants to show off whenever someone new comes along. So “Mama Jane” got an eyeful. He and Charli had a great time riding around and around our circular drive.

After the crowd dwindled, Charles and I settled down on the porch to watch the children and to talk about some past Labor Days when we really labored. For instance, we knew Will, if he had been here, would have laughed and groaned with us over the Labor Day we took the peach trees down. Daddy and Mama Graham came early that morning, Daddy hauling his tractor on his trailer. All of us spent a steamy hot day taking up a straggly clump of non productive peach trees. Neither Charles nor his dad considered Labor Day as anything but a day to get an extra job done while children were out of school to help.

Charli and Kaison found a Frisbee and threw it back and forth, Kaison chunking it like a ball, Charli sending it gliding and spinning. We watched their different methods and their runs to retrieve from bushes and the bird bath.  Suddenly Kaison threw the Frisbee straight up and it lodged on the limb of a large maple.

I didn’t have much hope they would actually dislodge the Frisbee but maybe they could have a good time trying. Maybe we could buy a few more minutes before one of us went to help them.

They came back with a basketball so heavy neither one could throw much higher than their own heads. We sent them back to the ball box for the blue “world globe” ball. It would be much lighter.

Kaison’s throws were wild. Charli had the right idea but couldn’t send the ball high enough. Charli then devised a plan and we tried not to laugh too loudly as we saw her struggle to stand up with Kaison on her shoulders throwing the ball. When that didn’t work, Charli took on an extra degree of persistence and hoisted the ball straight above her head.

Others had come to join us on the porch. We all cheered when the Frisbee came down, the greatest accomplishment of the day. I think Charli was as surprised as we were and definitely was one happy second grader.

As my brother John would say of our Labor Day amusements, “A great time was had by all.”