Serendipity on a Sunday Afternoon 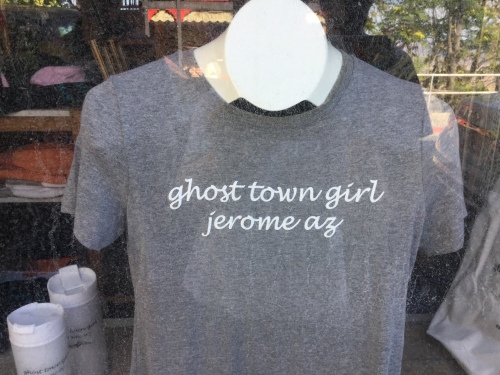 Sometimes the most interesting places are those you happen on. Even when you carefully plan a trip and enjoy each segment fully, looking back, you find great pleasure in remembering the short detours, unplanned “serendipities”. (That’s a word passed on to me by my Uncle Burns who described a surprising pleasure as a “serendipity.”)

It was a Sunday afternoon in the little town of Jerome, Arizona. Jerome is perched on the side of a desert mountain we’d reached in our touring van. To be more accurate, the mountain is called Cleopatra Hill. Hailing from South Georgia, I don’t call it a hill! When we parked, I wasn’t real sure we wouldn’t tumble right back down the mountain, the space between heights seemed so tight. Looking down past cacti, scrubby trees, and even some brilliant orange trumpet vines, we could see a structure in the distance, maybe a service center we’d passed coming up. Looking up the mountain we could see a grand big building dominating a flat area and overseeing the whole Verde Valley there in Arizona’s Black Hills. One shop owner told us it is a hotel now but once was a hospital. 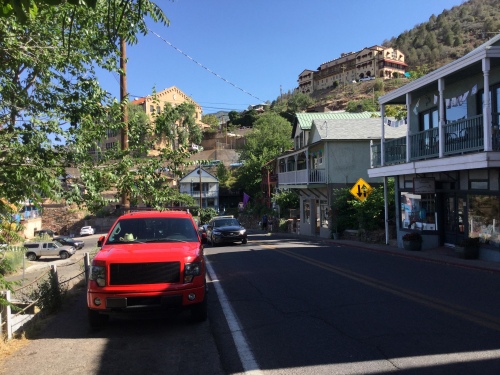 From high on Cleopatra Hill the Grand Hotel, once hospital, watches over Jerome

That hospital was part of the unusual history of this town, now dubbed a ghost town. It isn’t really a ghost town where all buildings are vacant and cobwebs curtain the windows. There is life in this place, even though some shops were closed that Sunday. Other tourists, like us, ambled up and down the steep street dropping in on shops that were open, gazing in windows of the closed ones.

In one shop we bought a bottle of Scorpion Sauce to take home to Charles D who enjoys experimenting with new grilling accompaniments. I saw a tee shirt on a dummy touting “Ghost Town Girl, Jerome, AZ”. There was an art gallery, then up the street a brothel sign left over from days when this town was known as the wickedest in the west.

Charles and our grandson, Thomas, outside one of Jerome’s shops

And all the time, from high above us, that former hospital, now a haunted hotel, peered down at us like a mountain gnome deciding our fate.

From reading markers and talking to shop owners we put together a sketchy history of this town. It was a mining town, a copper mining town, one of the biggest in Arizona in the early 20th century. But as copper became less desirable and the gold and silver had run out, the town declined. A Mr. Phelps Dodge actually decided to raze the town. He had destroyed several buildings before some discerning people stopped him. They realized that this town, once the fourth largest in the state, could rise again as a tourist village.

In our short visit we also learned that the miners in Jerome were stricken with copper poisoning which made them lose their minds. The large hospital was built and adapted as a sanitarium. Looking up at it from Jerome’s main street it isn’t hard to imagine at least some patients not fully possessed of their faculties walking out the entrance and falling to a quick death on the steep slope. It was reported that 900 people died in that hospital from various causes.

A quick check on copper toxicity shows it can be caused by “excessive exposure” and that it can affect the neurological system. Perhaps the copper toxicity coupled with vast amounts of booze, which was readily available, caused a high percentage of mentally ill miners. Think what that must have done to their families, to the town.

Years later that hospital was refurbished and renamed The Grand Hotel. Many who register there are hoping for a ghost sighting, or to hear groans and moans, or at least orbs.

Whether or not the hospital was actually a mental institution, one word embedded over the entrance in bold letters seems to support that. The word is ASYLUM.

The hospital, now hotel, crouches above Jerome like a guardian or predator. It’s a fascinating story. If we had had time to stay longer exploring the Black Hills of Arizona, would we have rented rooms at the Grand Hotel or would we have opted for the smaller, more intimate looking Ghost Inn located right in the middle of the little town? Maybe we would have gone to visit the Douglas Mansion built in 1916 by a mining magnate. Or we might have viewed a 1918 mine shaft from a glass platform, or visited Jerome’s Jail House which, many years ago, slid 200 feet down the mountain. There were no inmates in it at the time.

As it was, we drove back onto the Prescott highway and left that little western ghost town clinging to its stories and advertising its haunted hallways in the Grand Hotel. This “serendipity” gave us another taste of the great state of Arizona and fulfilled a spoken request by some of us to see a “forgotten Wild West town.”

Whether it’s here, or there, I admire those folks who so sturdily and imaginatively restored their town. And if they took a few liberties with legends, who could blame them?