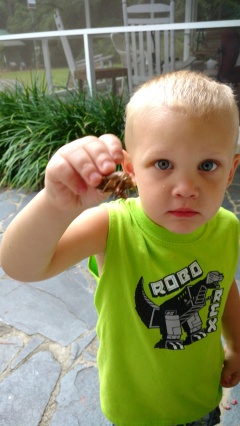 Do you hear them? I was sitting on my porch in South Georgia talking on the phone to my sister Suzanne in North Georgia when she said, “The cicadas are here today.” And I could hear them in our yard too making music in waves of summer sound. That was probably about the first of August. But the summer sound lasts through September so I’m still enjoying the daily rhythm of music in the trees. It’s a background sound to whatever else is going on, a sound which makes me feel with Browning, “God’s in His heaven All’s right with the world.” (Though Browning was listening to a lark instead.)

But is it really cicadas or locusts or katydids or crickets we hear?

Kaison, three years old, who plays with me on Tuesdays, asked enough questions about the “bugs” that I set out to settle some facts about them.

First, he found the empty skin of what I used to call a locust clinging to a pine tree where the transformed creature left it. He held that skin tenderly in his hand and asked if he were okay. “He’s gone,” I explained. “No, I have to take care of him.” He examined his eye places, his funny prickly feet and, of course the split in the back where the fellow crawled out and flew away. He babied that skin for two hours before something else got his attention.

In a week or two, Kaison found the dead body of a winged creature lying by our back door. He picked him up too. It had beautiful transparent wings, some green and black on its body, no signs of why he had died. I told Kaison this was one of the cicadas that had come out of a skin like the one he had found. He was baffled and amazed. Again, he cradled that “bug” in his hand for an hour until I finally persuaded him to lay it gently in the low fork of a susquina tree.

As I told Kaison his “bug” was a cicada, I wondered if it were a locust instead. And what exactly was a katydid? I decided to do the up-to-date encyclopedia search, in other words “Google” it. I wanted to be sure I didn’t lead this little boy astray!

So here it is, the truth about the hoppers, Flyers, leg-rubbing, vibrating fascinating percussionists of summer.

Crickets live in the grass and chirp as they hop about. Any pond fisherman knows crickets. They don’t live in the trees. So when you hear their little songs in the grass, you’ll know it’s crickets. They don’t form bands, either, like katydids and cicadas. Crickets are more ensemble and solo singers. Like “The Cricket on the Hearth” by Charles Dickens.

Katydids sing at night, that is, they rub their legs together to make their fascinating waves of sound. They look more like a grasshopper than a cicada though their raspy sound is similar. Just know when you sit on your porch watching the stars come out it’s the katydids saying “Katy did, she didn’t, she did.”

Locusts are bad boys. They eat whole crops, take away the livelihood of farmers. Locusts were one of the plagues God sent on Egypt when Pharaoh wouldn’t let his people go. And I think the sounds you hear are the sounds of a million wings buzzing and an eerie chomping sound. At least that’s the way I’ve read about them in western pioneer novels. No peaceful rhythmic orchestra sound. But they do have a cousinly resemblance to cicadas in appearance.

Which leads us back to the cicada. There are, of course, many kinds including the ones you may have heard about this year called the seventeen year cicada. Those have an amazing life cycle. It goes from tiny larvae in the ground for seventeen years, to brown beetles crawling out on God’s time table and climbing trees, to the great transformation, the summer concerts, the mating, and then eggs falling out of the trees to the ground where they wiggle down and do their seventeen year thing again, not sleeping but drinking juice from tree roots. Cicadas, unlike locusts, do not eat foliage. They just drink sap which usually doesn’t hurt anything.

There’s also a thirteen year cicada and then just the regular annual ones which we know. In states where the seventeen year cicada came out in droves people were warned to beware that their pets not make themselves sick eating too many, or get choked on their wings. People do actually eat them too, prepared in many ways–fried, chocolate covered, pickled, you name it.

When I was a kid my brothers loved to sneak up behind me and place a brown prickly cicada skin in my hair. One of us girls ended up going to church decorated thus, causing muffled snickers in the pew behind. I don’t plan to tell Kaison about that.

I’ll just tell him again that the sound he hears high in the pines on a hot day are those cicadas with beautiful wings making music for their girls. They have special built-in instruments that vibrate with great vigor. So listen to them as they “sing” tonight. They’ll be gone very soon

What amazing creatures! Do you think God created them to make us smile?